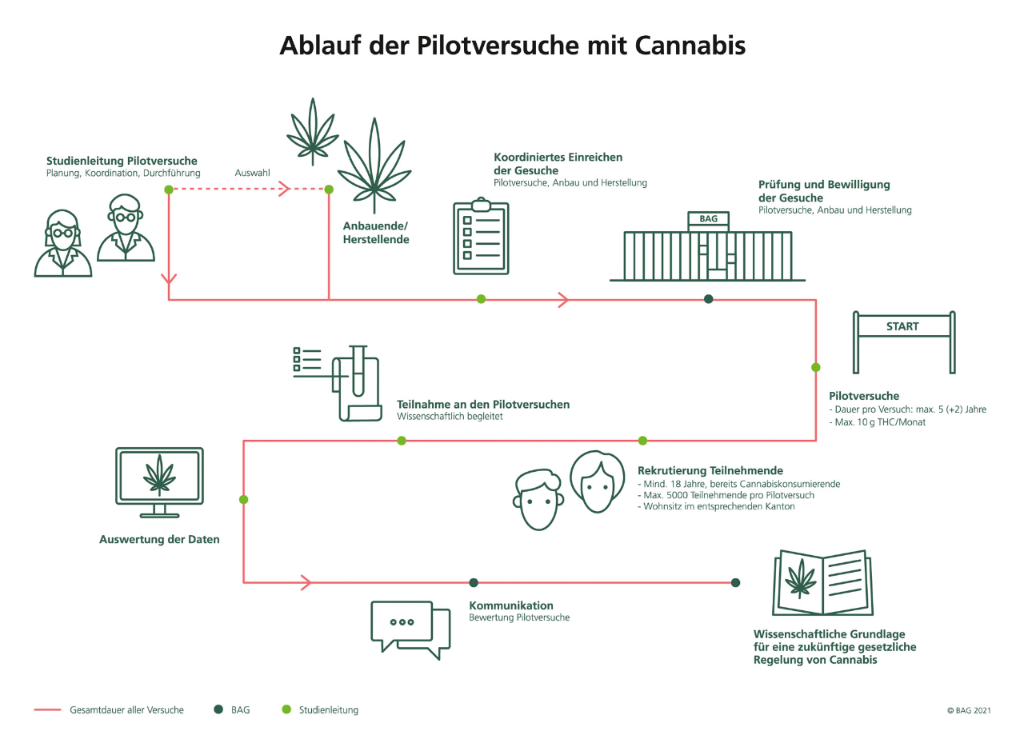 This summer, the topic of cannabis was regularly taken up by the media. The focus was on the so-called pilot tests. These allow the dispensing of cannabis containing THC, currently in the form of flower or hashish, as part of scientific projects. We reported more than a year ago on how the legal basis for the pilot tests came about. Since then, a lot has happened now: the first pilot starts sales and others are in the starting blocks.

The pilot test in Basel has received the most public attention so far, as it has been pushed forward by far the fastest. While other cities haven’t even submitted their trial concepts yet, Basel’s trial began this week. However, the sale of cannabis will be delayed for a few more days due to contamination of the products.
Study participants who are required to participate in a study survey every 6 months. One reason for the rapid progress of the Basel project: The University of Basel already started preparing a pilot trial in 2016 and was thus soon able to settle the cooperation between the University Psychiatric Clinics, which are scientifically supervising the trial, and the City of Basel after the “Go!” from Bern.
Offered in Basel are four different flower varieties and two hashish varieties in organic quality, each with different THC content. As stated in the pilot testing law, a maximum of 10 grams of THC may be purchased per month. How many grams of flowers this gives depends on the THC content of the product.

In the city of Zurich, the pilot trial does not start these days, but progress was also made. The Zurich project, which is currently pending with the Federal Office of Public Health (FOPH) and a cantonal ethics committee, is particularly notable for its size: 2,100 THC users living in the city of Zurich are being sought, and a waiting list is currently being maintained. Furthermore, the focus in Zurich is on comparing different sales options. In addition to 10 selected pharmacies and the city’s drug information center, ten “Cannabis Social Clubs” will be given the opportunity to create a social meeting place with 50-150 study participants, where the focus is not only on selling hemp but also on social exchange and joint consumption. One of these clubs is expected to be run by the “Legalize It!” association.
Those who want to participate in the Zurich pilot can one day register directly with the registered pharmacies, the social clubs or the drug information center. To ensure that the data on the different sales options remain as meaningful as possible, the flowers can only be obtained during the 3-year study from the sales outlet where the registration was made. The prices of the products sold are the same at all points of sale and, as in Basel, are based on black market prices.

What’s going on in Bern?

The city of Bern has also submitted a pilot trial application to the FOPH. However, it is almost impossible to find out how far this process has progressed. The last time Bern made itself heard was in a rather unpleasant way: the canton wanted to put a stop to sales in pharmacies. Requested instead were sales at drug dispensaries. So while Zurich is experimenting with social clubs, the conservative government of the canton of Bern celebrates the image of drug-addicted stoners and equates hemp with hard drugs like heroin. However, the FOPH called off the canton, saying it had nothing to say about the pilot tests in the city.

But there is also more pleasant news: The city of Biel is also expected to participate in the pilot trial of the University of Bern. A contingent of 100 to 170 people is envisioned who could buy cannabis at Pharmacie Dufour in Biel.
In addition to the trial at the University of Bern, the association “Cannabis Research” wants to start another trial in the canton of Bern in cooperation with the University of Zurich.

Since we do not maintain a dispensary or grow weed containing THC, we are not involved in the pilot project processes currently underway. Nevertheless, with our store on Breitenrainplatz, we see great potential for studies on the legal distribution of hemp. Specialty stores may well be a viable option for the distribution of cannabis products, as they can optimally cater to the needs of their clientele.
Therefore, we are trying to participate at least in a pilot test, for example, of the association Cannabis Research as a point of sale.

Visit us at CBD & Coffee at Breitsch!