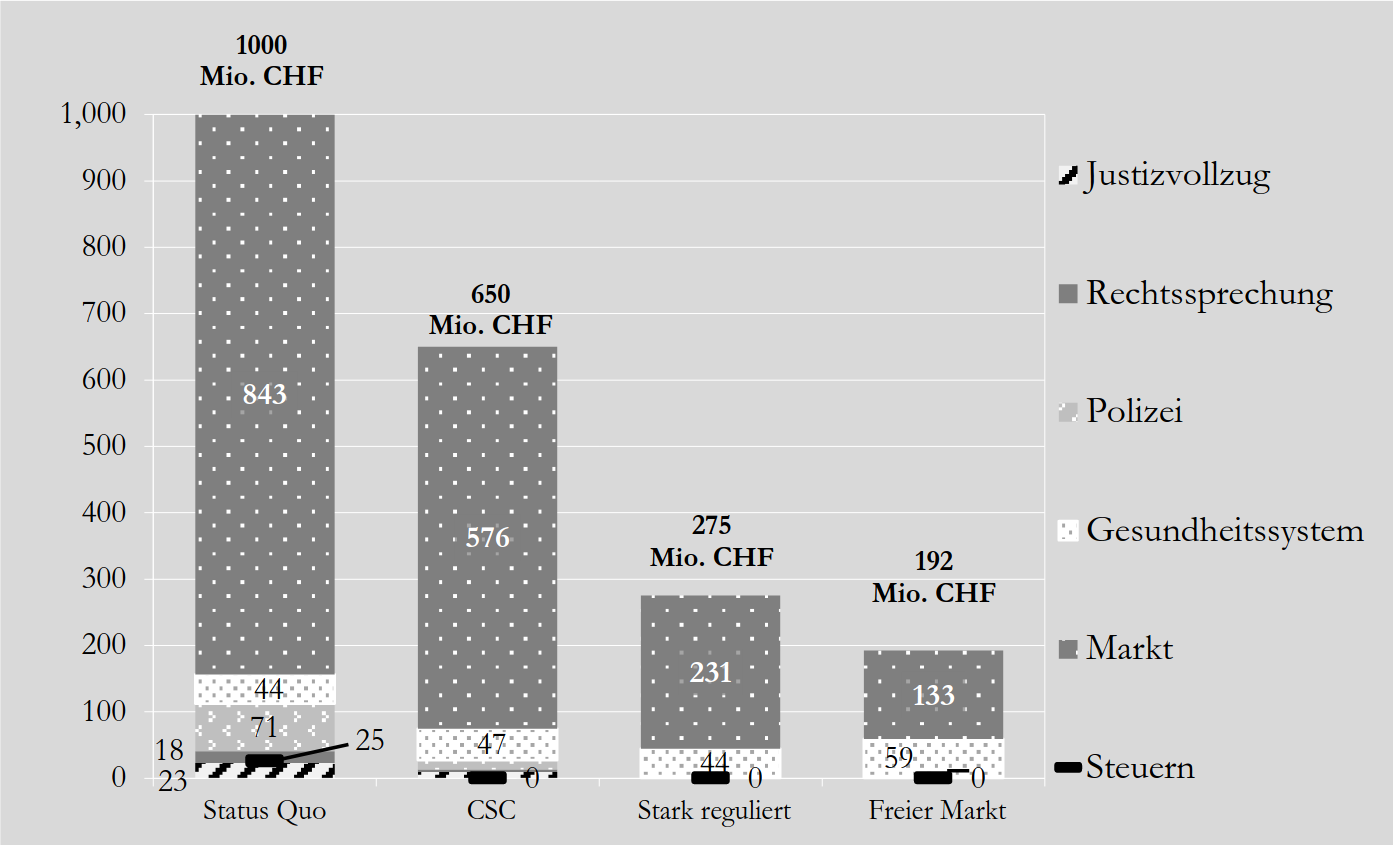 What legalization would bring economically is hardly discussed. However, the topic offers plenty to talk about.

The possible legalization of cannabis brings many different issues to the table. Discussed are the health effects, forecasts of changes in consumption, prevention, consumer protection, repression, and political feasibility. A study has finally been published on the financial advantages and disadvantages for the situation in Switzerland: Oliver Hoff from the University of Geneva has researched. On the one hand, the current situation is assessed and, on the other hand, the financial impact of different legalization scenarios is modeled. The aim is to find out what level of regulation would be appropriate.

This high turnover is mainly due to the extremely high profit margins in the black market, in addition to the amount of products consumed (approximately 175,000 joints per day). Around 430 million (43% of total sales) are directly attributable to illegal activities.
This distribution of sales is clearly disadvantageous for society as a whole. Illegal actors profit while the general public is left to bear the costs. In a legal cannabis market, some things would change: sales would probably decrease in any case, as the profit margins from the black market would not continue in this way. However, exactly how sales would continue in a legal cannabis market depends heavily on the scenario chosen.

Shaping legalization: Models for the Future

In addition to analyzing the current situation, the study “Cannabis in the Swiss Economy” also ventures into future forecasts. Three different scenarios of legalization are examined for their economic impact.

The CSC scenario assumes legalization of cooperative production in the context of cannabis social clubs. The production, distribution and consumption of cannabis is organized in registered adult-use clubs. This system currently exists in various countries, such as Uruguay. The pilot in Zurich, which should start in the next few months, also includes social clubs. In a CSC scenario, the black market could hardly be dried up completely, according to Hoff, because signing up for a social club would be quite a big effort for casual consumers. Regular consumers, on the other hand, would be able to benefit from legal certainty in clubs.

In the highly regulated scenario, a legal market is recorded that legalizes production and trade in licensed companies from the private sector. Consumption and possession are also legal. Cannabis is taxed by weight and retail value. The concrete design of the model is based on a current template from New Zealand.

A Free Market would involve commercial legalization in a for-profit market with few cannabis-specific regulations. Cannabis would be one product among many and would be regulated similarly to other consumer products. The taxation is carried out exclusively through the usual value added tax.

Sales and taxes after legalization

Total sales in the Swiss economy would decline in any case compared to the status quo. It is lowest in the “Free market” scenario, with forecast sales of CHF 195 million. In this, competition would reduce profit margins and production costs to a minimum. There would be hardly any tax revenue worth mentioning, which means that any prevention and health costs incurred would have to be borne by the general public. This is problematic in that these costs would likely be the highest in such an unregulated market compared to other scenarios.
In a highly regulated market, a tax burden similar to the tobacco tax would generate revenues of up to half a billion Swiss francs. These could be earmarked for prevention, consumer protection and covering the social follow-up costs, according to the study. The calculated total revenue amounts to CHF 275 million in a highly regulated system.
Total revenue is highest in the CSC scenario at 650 million Swiss francs.

When taxing a legal cannabis market, it is essential to consider the interactions with the black market. Since the black market is of considerable size today, it is unlikely to disappear overnight even with the introduction of a legal market. This is also evident from the experience of other countries, such as Canada.
There are several issues worth noting: Young black market customers cannot find a place in a legal cannabis market. Further, the black market will try to undercut the prices in the legal market. With today’s profit margins, there is quite a bit of potential to keep up in a price war for a relatively long time. This interaction argues in favor of keeping the tax burden in the legal market rather low at the beginning in order to crowd out the black market as a first step. Once this is severely weakened, the tax burden can be raised.

Repression and health in the legal market

In an initial phase, legalization would hardly lead to a relief of the repressive organs. On the one hand, the declared goal would be to fight the black market, and on the other hand, the newly introduced market would probably have to be subject to relatively strict controls.

Projected health care costs are influenced by many factors. In a “free market” scenario, costs are assumed to rise moderately. The reason for this is an expected increase in the number of consumers, as a free market would offer not only low prices but also very easy accessibility and advertising opportunities.
In contrast, in a highly regulated legal market, it is believed that prevention messages and addiction services, combined with expanded consumer protection, could positively influence health care costs. However, a reliable statement cannot be made due to the extremely complex interrelationships.

What is the point of such studies?

The study of Oliver Hoff works in many aspects with highly simplified models, but offers an important basis for the political as well as the scientific work regarding a legalization of THC-containing cannabis. Thus, it could be shown that different legalization scenarios show great differences, but overall represent a promising option also in terms of financial impact. Both in this field and in other areas, such as consumer protection, scientific work could contribute much more to the political discussion.

To our legal hemp flowers….